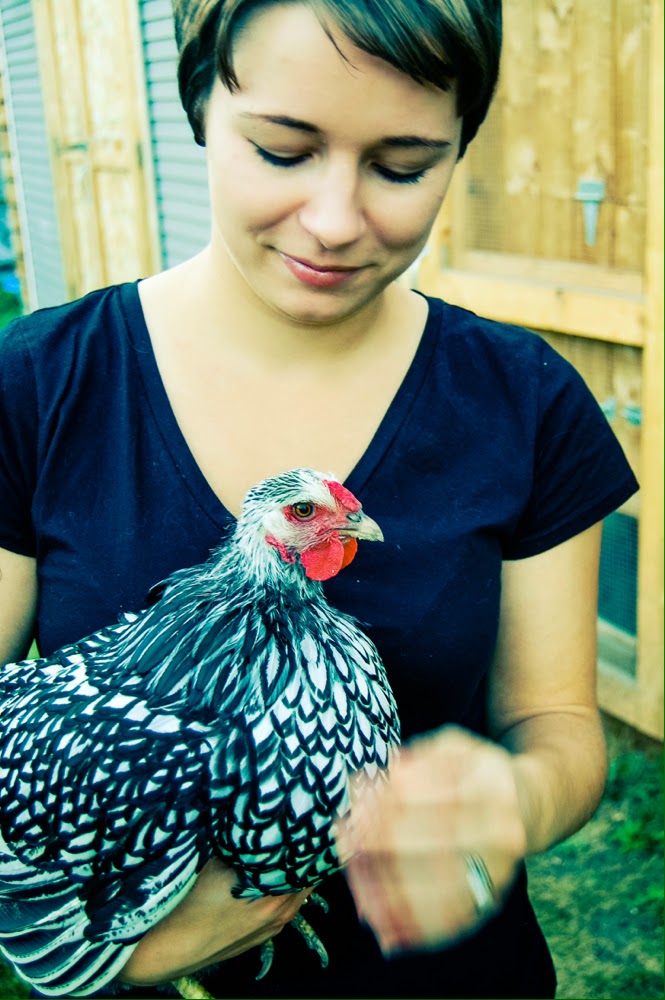 Hi, I'm Kristina!
And this is my Urban Coop: 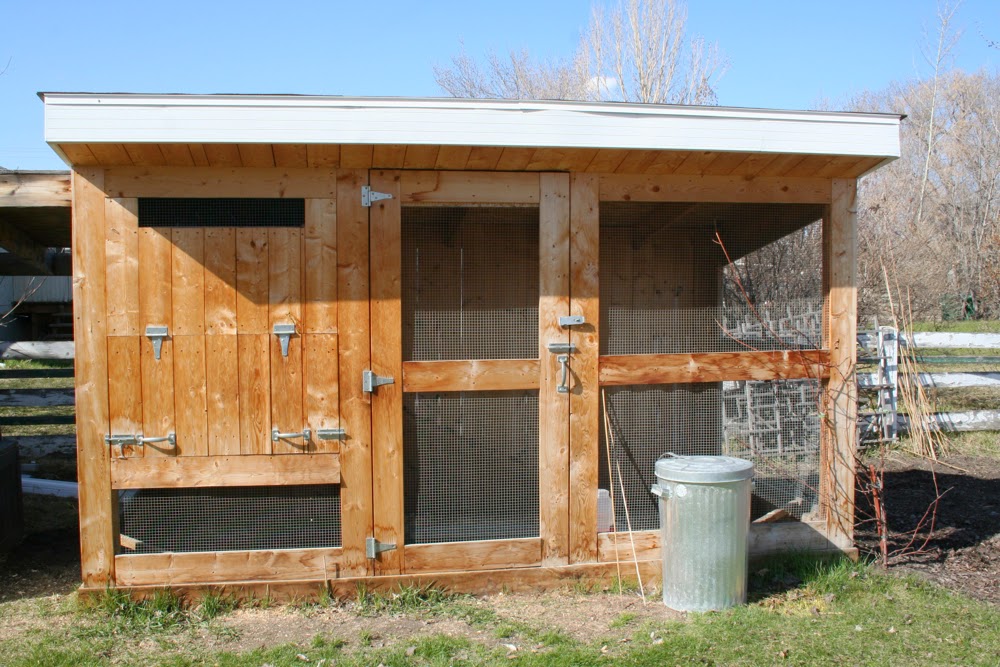 My husband built it to my design about 3 years ago. It is 12' wide, 6' deep, 6' tall in the back sloping up to 7' tall in front. It is framed with 2x8s which we got for free and sided with pine fence boards which we are allowing to weather naturally. It is quite large for an urban coop, but because my yard is unfenced and I knew my hens wouldn't be able to free-range that often, I wanted to make sure they had plenty of space in their enclosure.

Here it is in the context of (a small portion of) my backyard, which is enormous and a huge landscaping-work-in-progress. 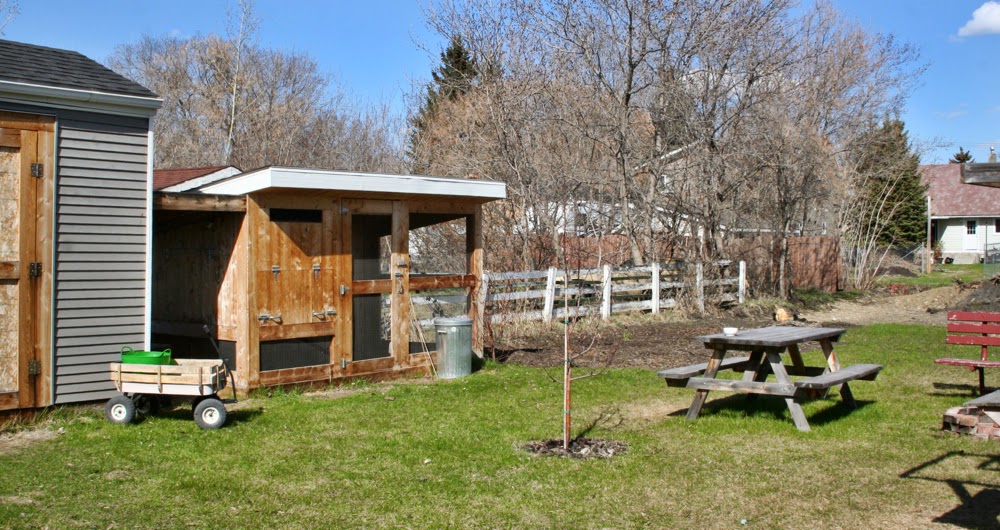 Here are the hens who live here! Hazel is the buff Orpington; she is the only one remaining from our original flock 3 years ago. She is the boss and she still lays nearly everyday. There are 2 silver Ameracaunas, who I cannot tell apart and so I call them Patty and Selma (their eggs are a lovely pale blue). And on the right is a silver-laced Wyandotte named Wendy.
They are happily dust-bathing in my yet-unplanted vegetable garden. I only let them range in the yard when I am either out with them or watching through the kitchen window. There are plenty of cats that also range my yard, but they've learned to steer clear of the chickens! A cat only needs to get pecked once to learn that lesson. 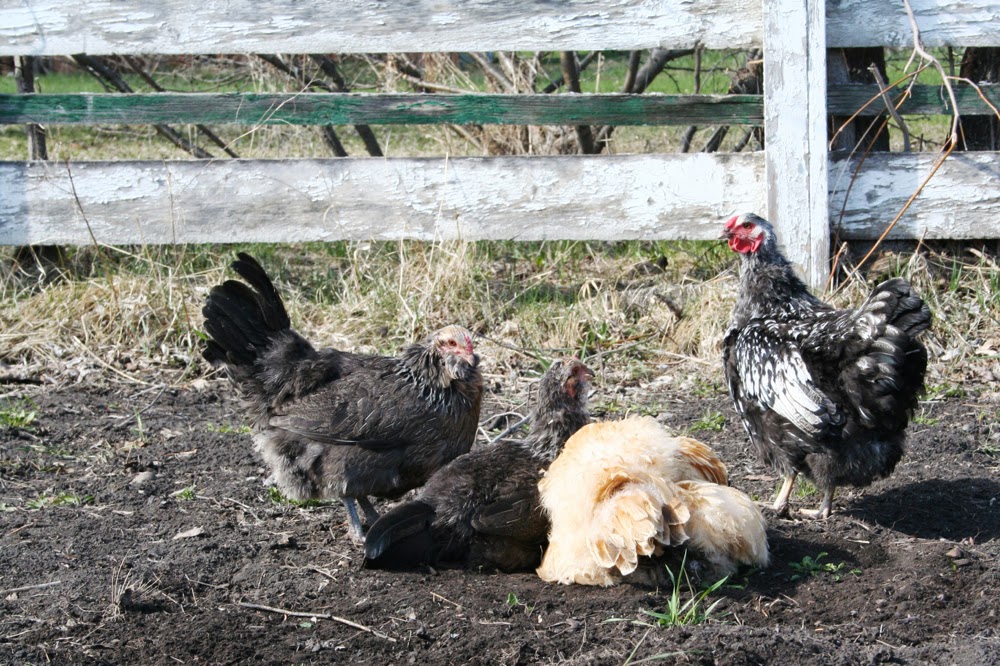 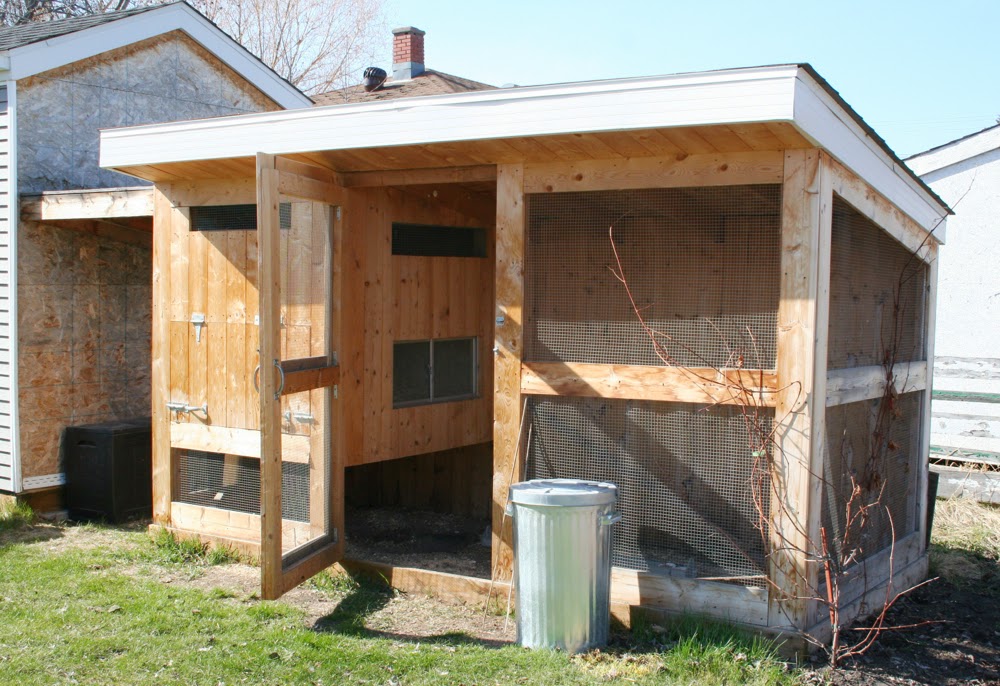 Here are some angles of the covered outdoor run portion of the coop. The floor is dirt sprinkled with pine shavings, which makes raking it out easier. I do that every few weeks. The feeding trough and waterer were purchased at Peavey Mart. We also have a heated waterer for freezing times, which made this last winter's chicken-chores much more bearable. There is a roosting bar in this front corner where the "boss" is frequently seen reigning over her subjects. 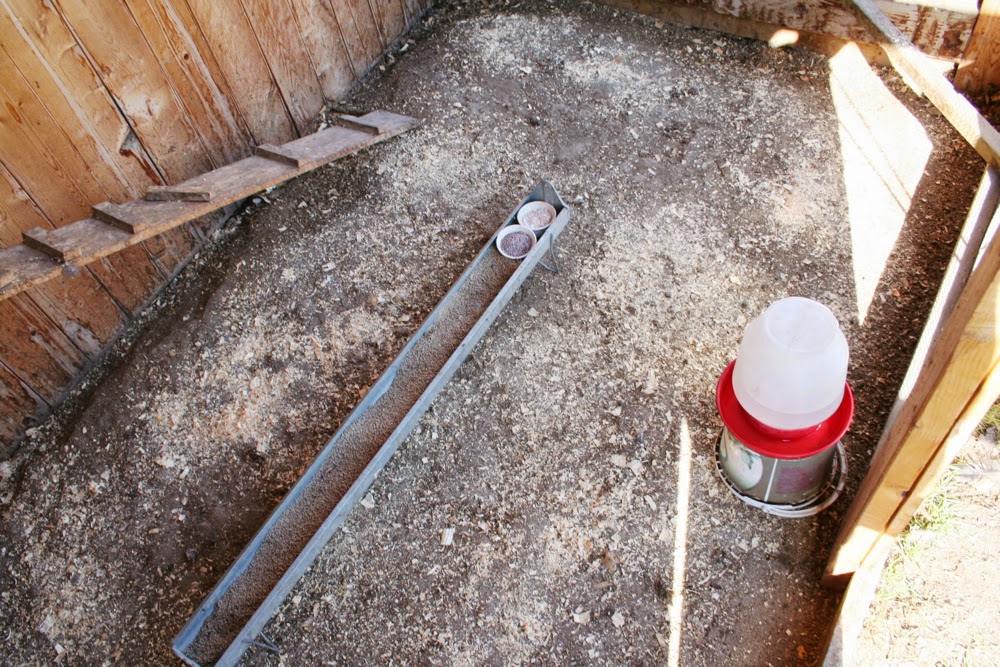 In the feeding trough I keep 2 little corningware dishes which I got at Salvation Army for 25 cents; one with grit, for digestion, and the other with oyster shell or crushed up eggshells, for calcium. 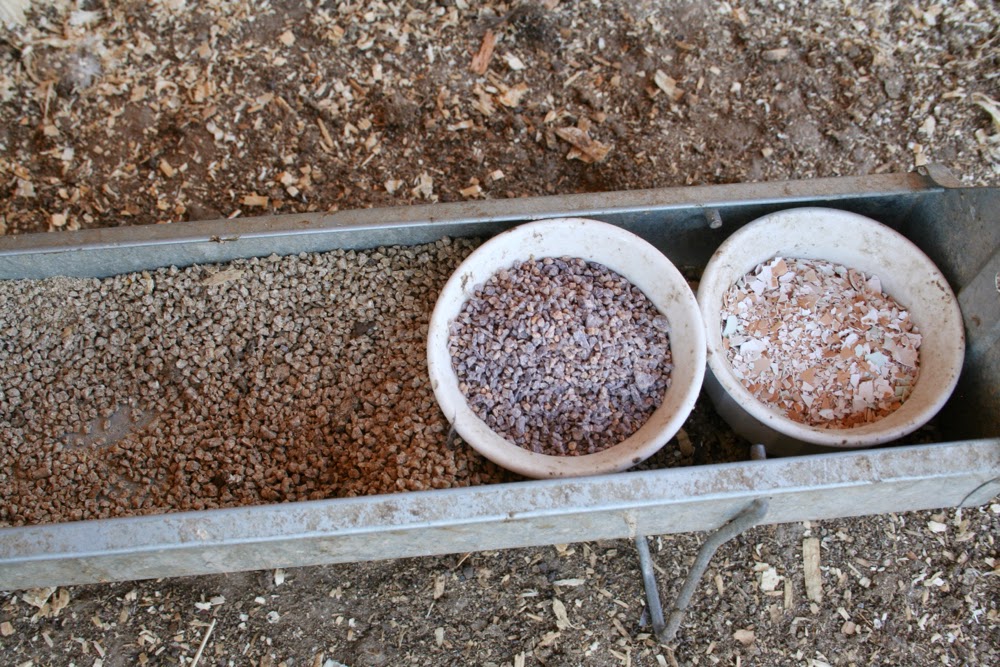 In the portion of the run that is under the coop, there is another roosting bar and a hole they have dug for dusting. I toss a small scoop of diatomaceous earth powder in there every once in a while to help them prevent lice and mites. There is also a log that I move around every time I clean, which kind of freaks them out/keeps their minds occupied. 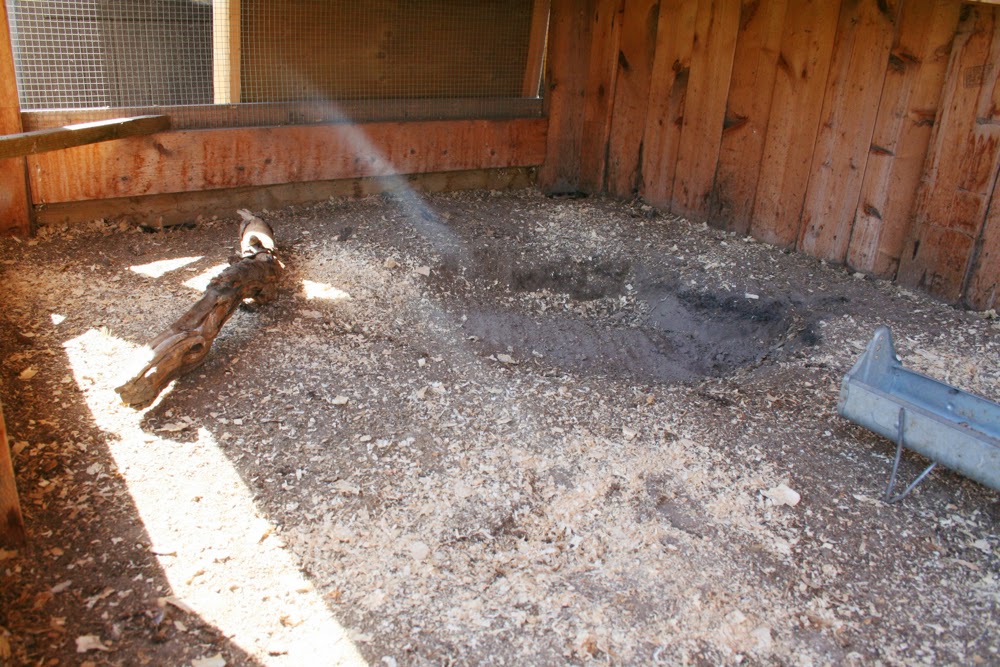 Here they are again! 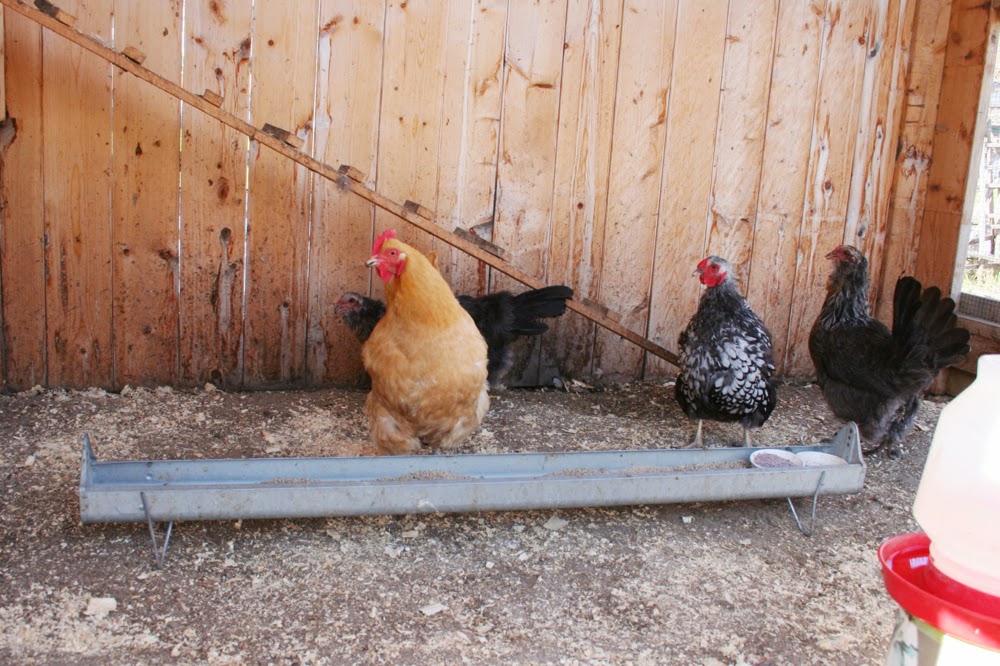 Here are some angles of the east wall of the coop. I don't ever close their little door, even in winter - they always come out! There is a large ventilation hole near the top of this wall and another above the egg door. The window on this wall lets the low morning sunlight warm the inside of the coop in winter. (The window came from Habitat for Humanity and is a single-pane aluminum frame slider deal, from an old camper I think.) We can also open the window for more airflow in summer. 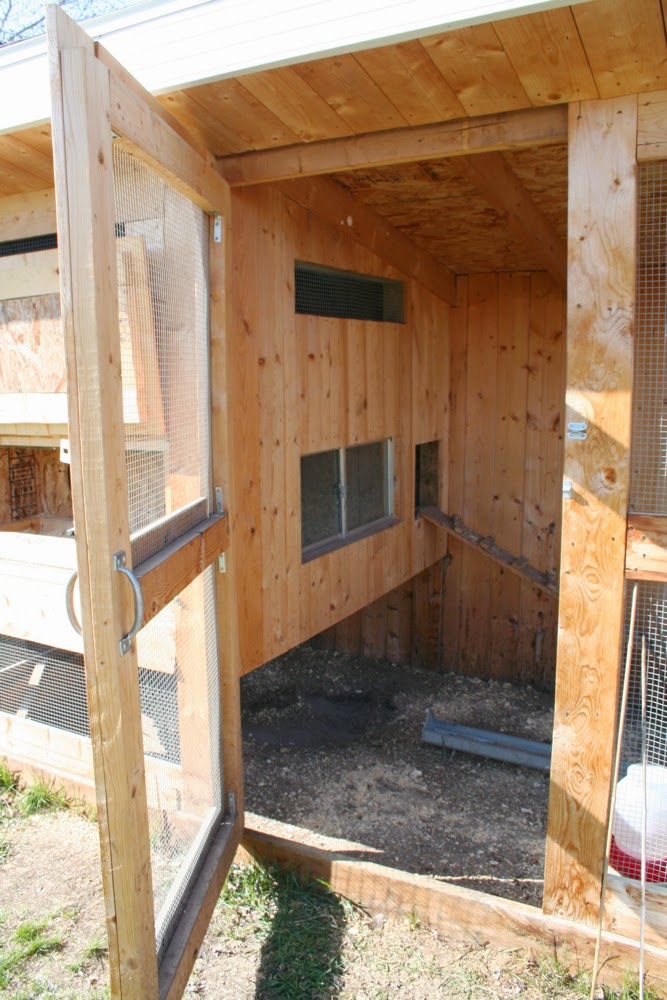 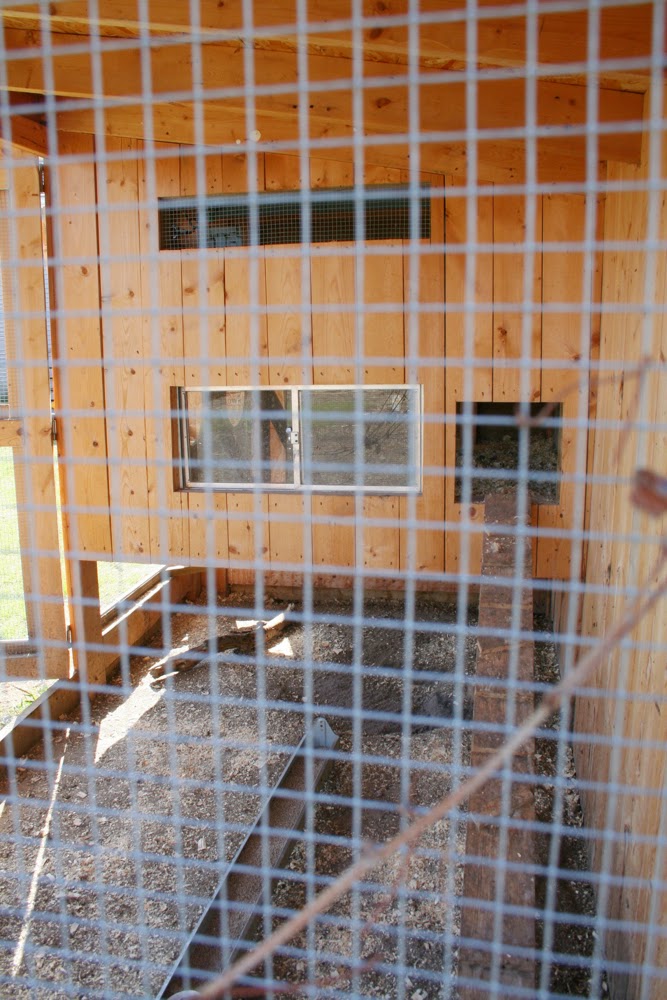 On the west side is my clean-out door, under a makeshift roof that we put up between the coop and the shed. The door itself is really heavy and a tight fit, which is great for insulation but makes it hard to open. This is one thing on my coop I'd like to change: I would love to have 2 doors that open from the centre here. It would make accessing the inside much easier. 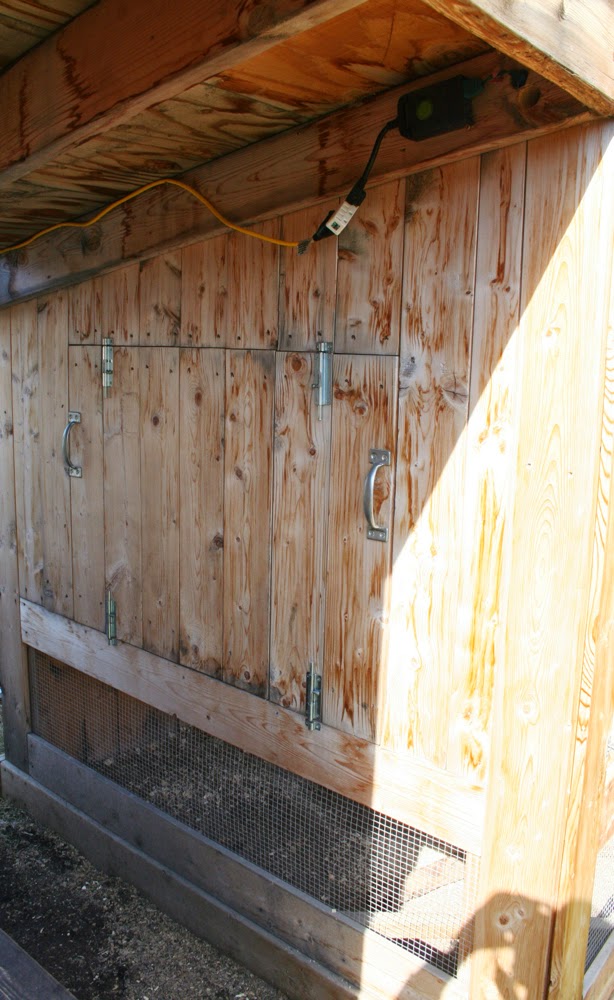 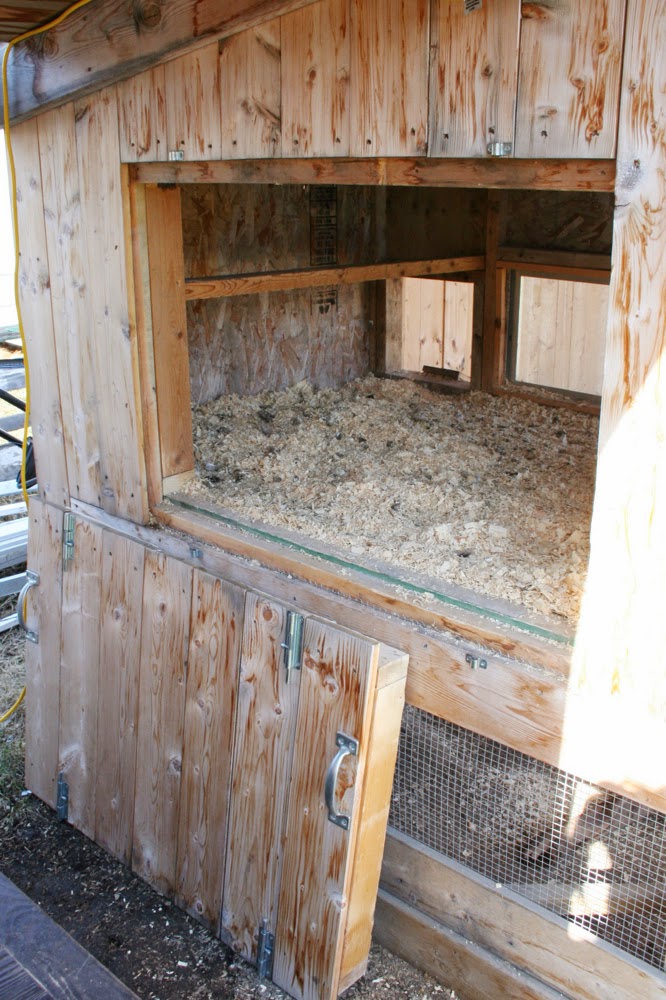 Inside, there's a 2x4 roosting bar on the left, which they all crowd onto adorably every night at dusk. You can see the ventilation above the window and the nesting boxes to the right. We put the slanted roof over the nesting boxes so that they wouldn't sit on it (one less surface to accumulate poop). On the floor, under the shavings, we have peel-and-stick linoleum tiles to make shovelling everything out so much easier. 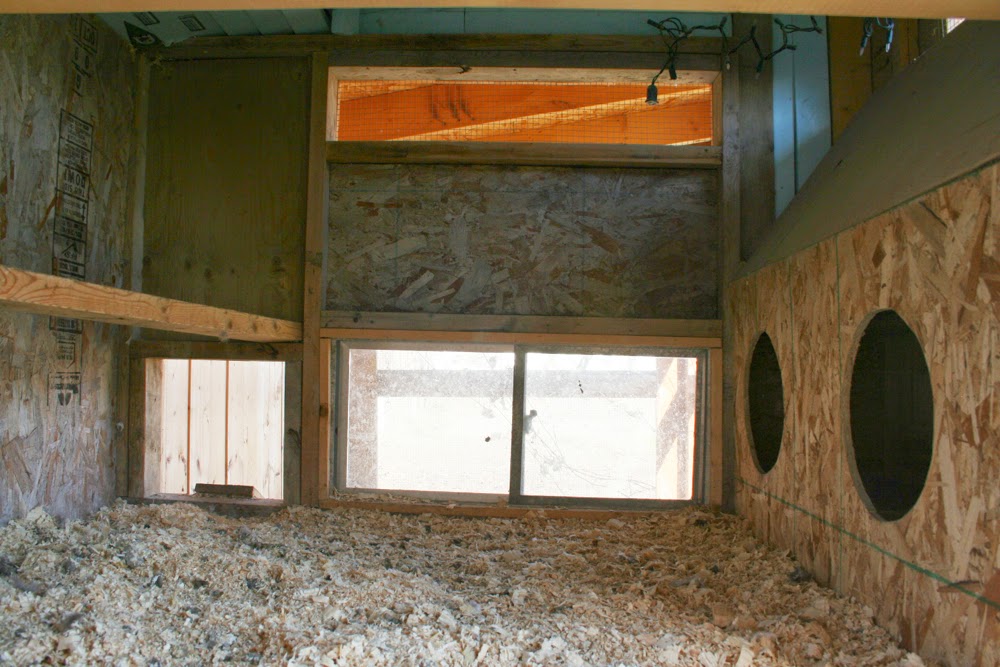 Above the nesting boxes you can see my "egg lights" - they're just outdoor twinkle lights connected to a timer on an extension cord from the house (which you can see fastened outside the door in one of the photos above). My winter egg production was unfortunately not improved by this lighting setup, so I'll have to tweak my timing with it next year, I think. 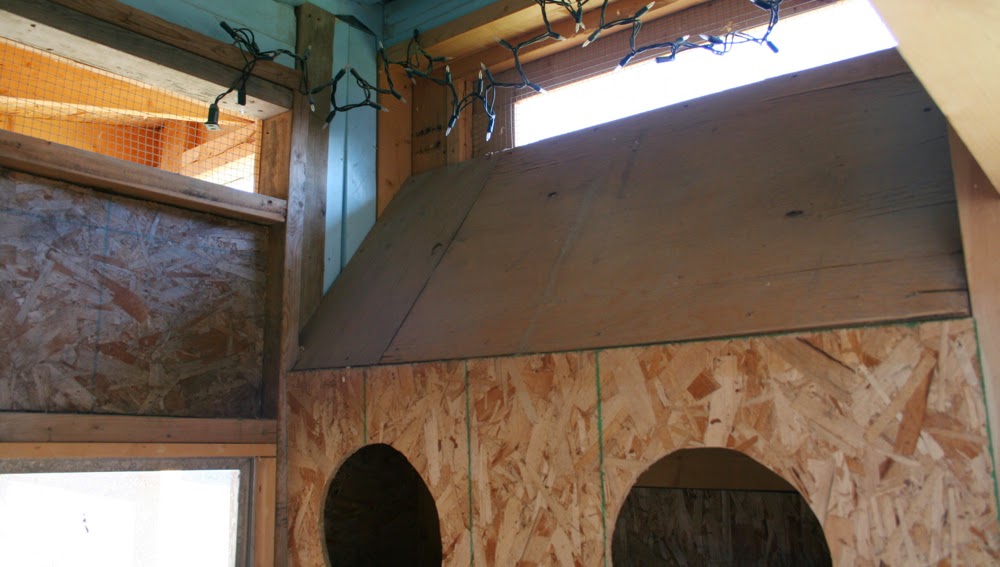 The whole coop is insulated with foam insulation and then boarded inside with plywood. It's warm, even with those big ventilation holes. This unfortunately makes the doors very heavy, but we have included a shepherd's hook latch to hold the door up while I'm collecting the eggs. I might prefer to have the door open a different way. 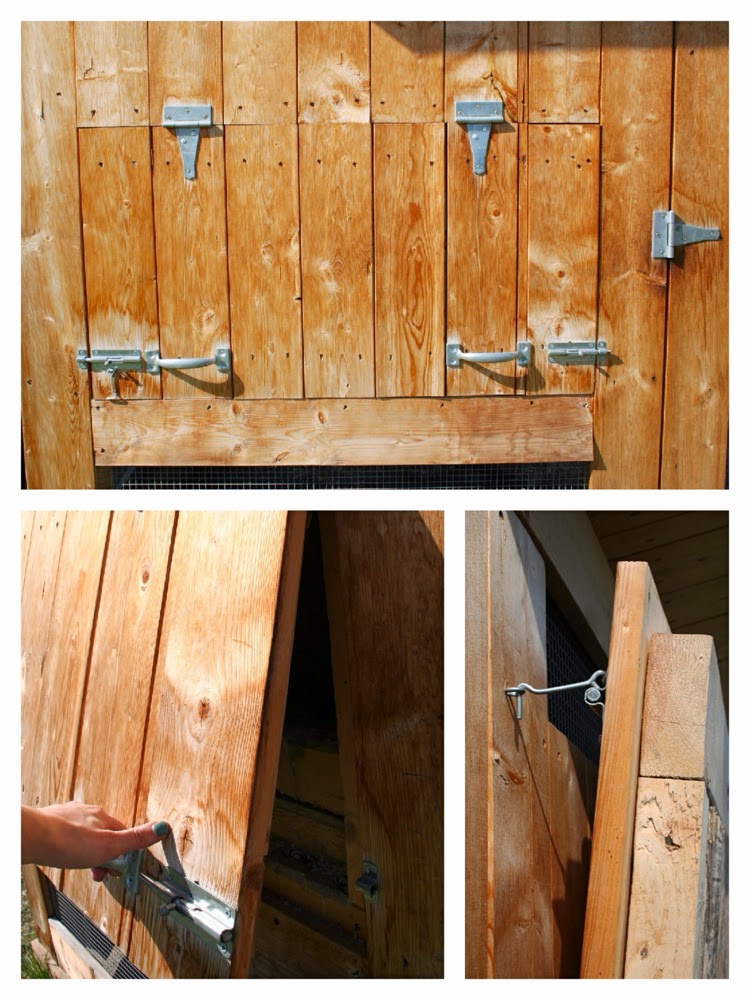 Inside the egg door is my favourite part! With a flock this small, you can see, you only really need one laying box. They'll all use the same spot. 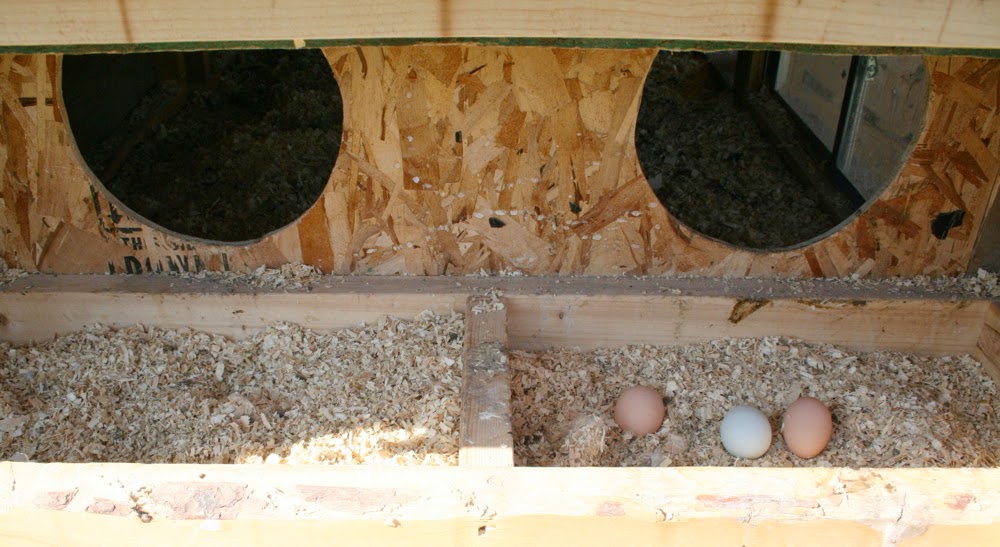 Next to the coop door, I keep an aluminum garbage can full of feed. You can also see the "herding sticks" (aka bamboo garden stakes) I use to corral them back into the coop when they've been ranging. 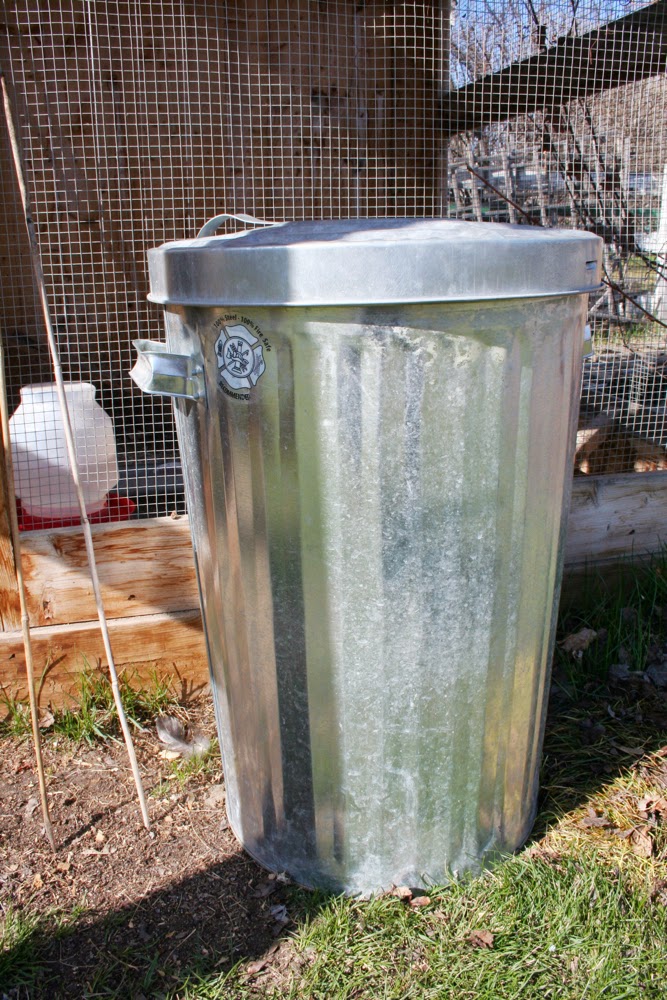 Inside the garbage can is organic layer's-ration chicken feed (which I buy from Alberta Feeds), and a few yogurt containers in which I keep extra grit, oyster shell, and sunflower seeds (for treats). 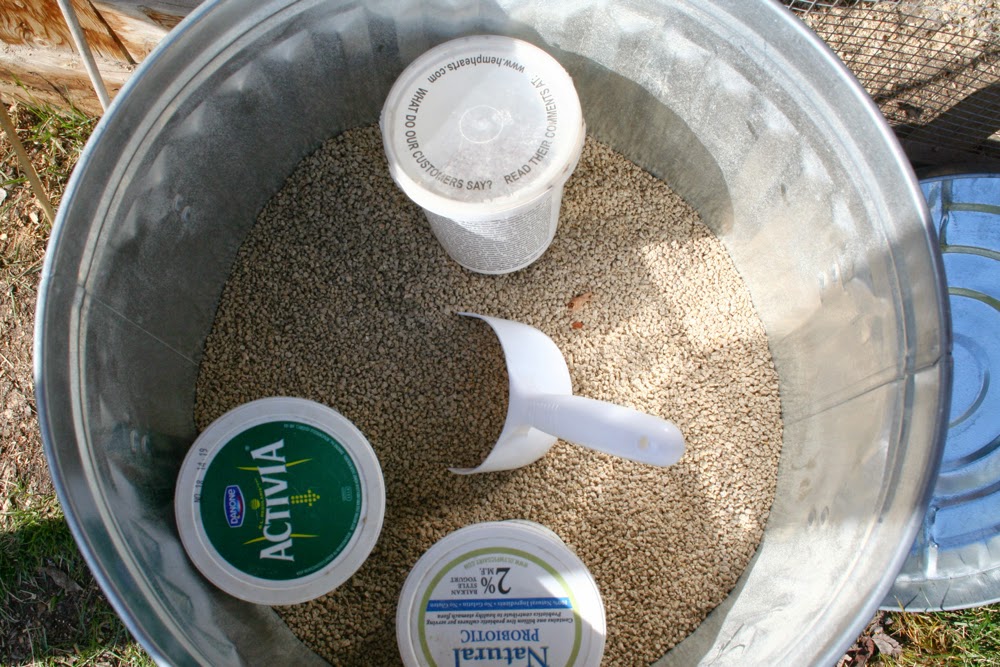 Between the shed and the coop I also have this storage locker thing, where I keep my big bags of supply refills and a bale of pine shavings. 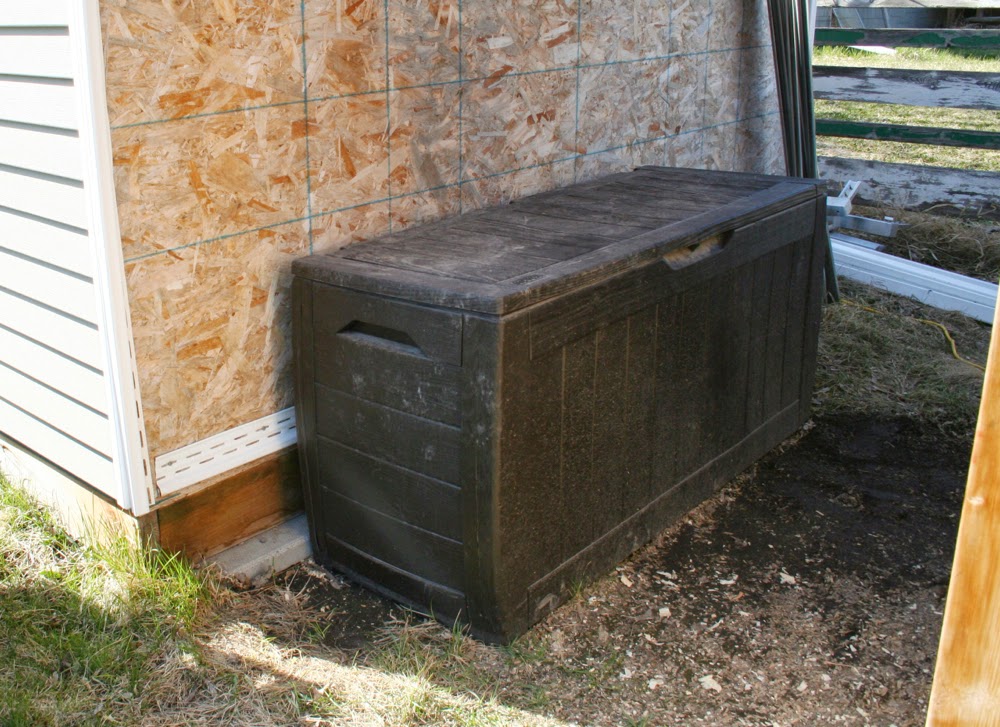 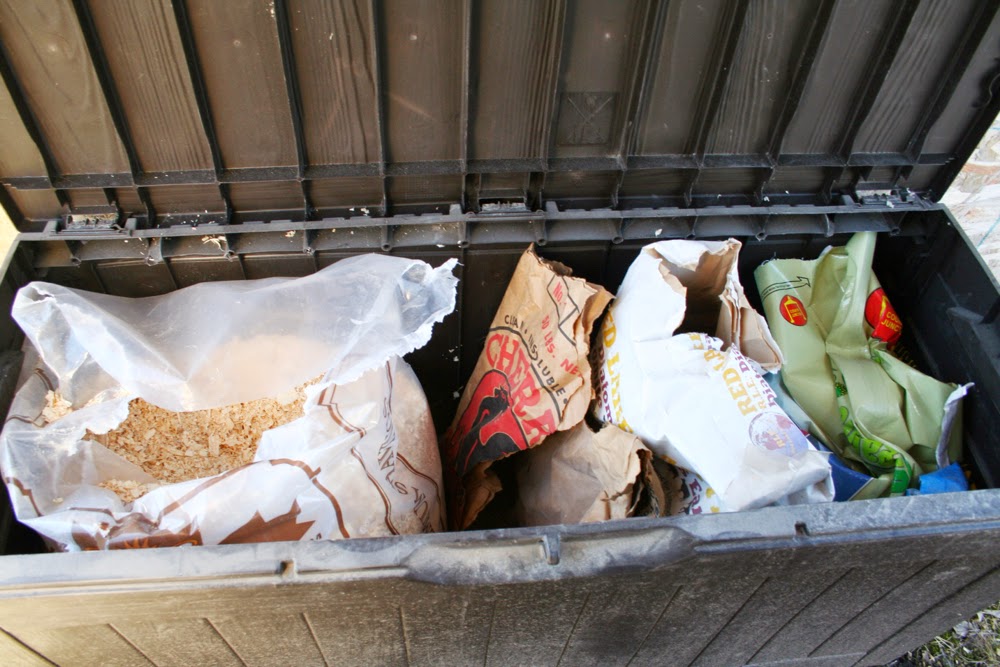 The coop's position next to the garden is perfect and lovely. I have a grape vine growing on that south-east corner which offers the chickens nice shade in the hottest part of the summer. Once my seedlings are established, I let the hens run up and down the rows eating slugs and weeds and, let's face it, a bunch of my lettuce too. 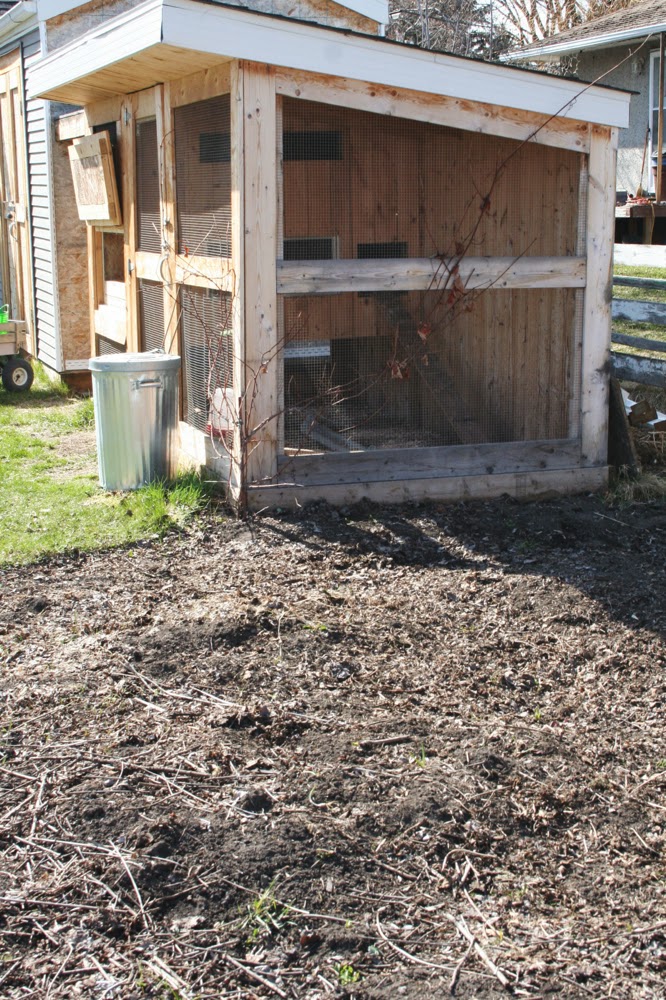 Here's a shot from last summer, looking from the mid-garden toward the coop & house. 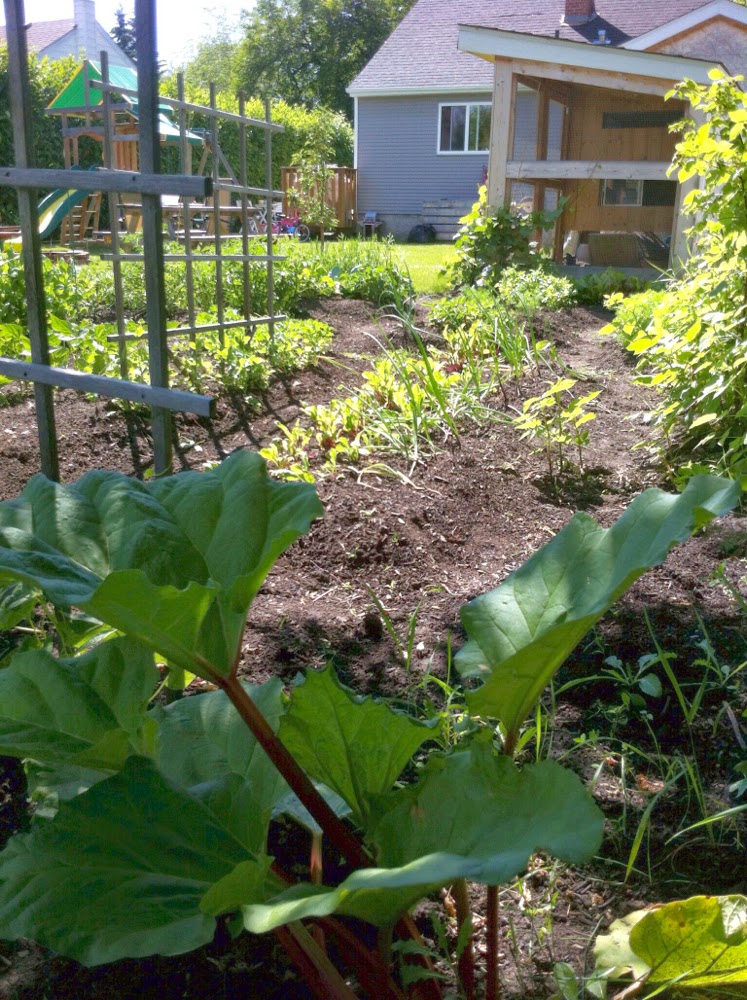 And here's the reward! Delicious, organic, free-range eggs on the counter. 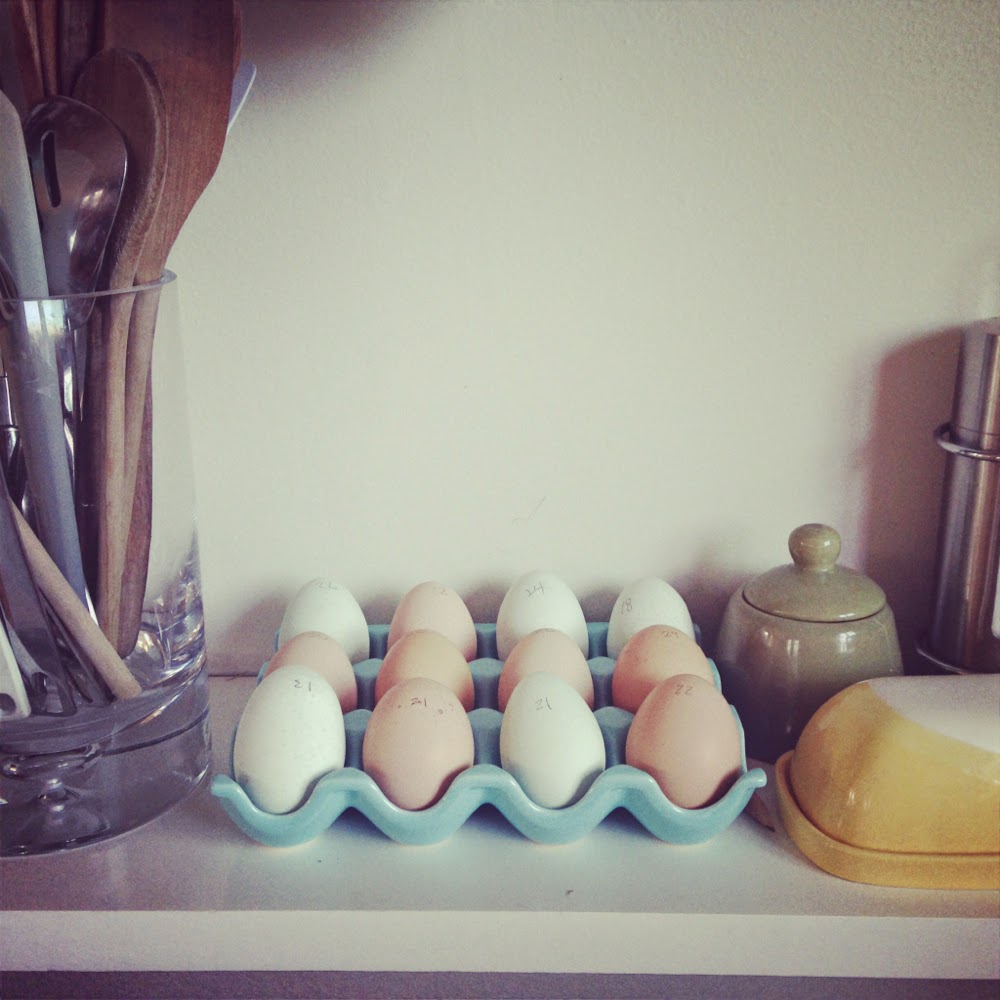 Well, I hope you've enjoyed my tour!
Feel free to ask me any questions you may have, here or on the CLUCK Red Deer Facebook page.
Thanks!
Posted by Kristina at 9:30 PM

Thanks To Our Sponsors!!